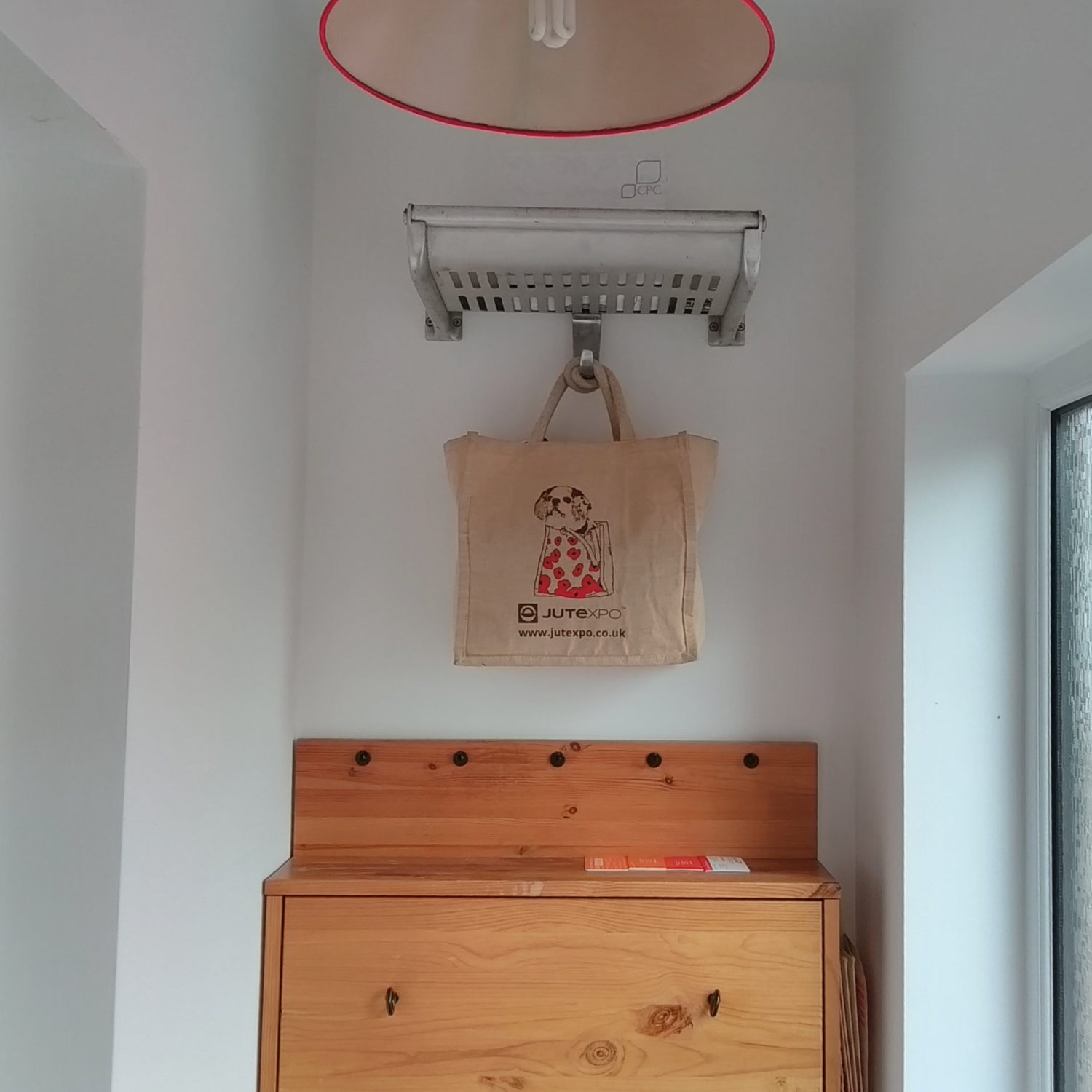 Thank you for joining in with his bag-travelling adventures and being part of his fanclub.  He far preferred to be with people than other dogs, so we’re sure that he took great delight in going places that most other dogs couldn’t and getting all of the attention wherever he went.  Most of all he enjoyed going out on the train or getting in a car and following us to work or staying with us on days out.

He’d not been able to walk a long way for a couple of years, but couldn’t walk more than quarter of a mile for the last couple of months. He was still happy, enjoying his food, our company, and his trips out in his bag. One evening a couple of weeks ago though, he was breathing quite heavily and he had to start panting if he walked more than one room to another, or climbed the stairs, or got too warm in a blanket. The following day he was OK, but after his dinner in the evening he started panting again. We carried him out for a walk round the block in his bag because it was cool outside and that calmed him, but he still breathed heavily overnight, and panted again in the morning.

That was two weeks ago – the Wednesday before the snow came. We took him to the vet as soon as they opened that morning, suspecting that it could be a one-way trip. We carried him in his bag all the way and he took everything in – sitting up straight in with the cool air breezing past him, he looked around as normal at the street and everyone on it as we walked along.

The vet listened to his lungs and heart, and while she suggested we could operate to drain the water that was collecting in his lungs and start medication to try to improve his heart, we knew the day was always going to come and knew that it was his time to go. He wasn’t at all strong enough to have any operations – he was a very old man and had slowed down a lot. We held him while they sedated him, then after a few minutes they put him to sleep with a second injection as we held and stroked him. It was hard to do, especially as he was so regal and alert in his bag on the way, but there was no real alternative – putting him through multiple trips to the vets, operations, and drugs just for a few more weeks or months together would’ve been completely unfair.

His last daytrip out was to Chinatown the previous Sunday morning when we watched the parade down Shaftesbury Avenue to welcome in the year of the dog. A few weeks before that we’d been out to go around the Lumiere London light displays and a couple of weeks before that, the New Year’s Day Parade at Trafalgar Square, so he was well travelled and cultured right to the end.

We miss him terribly, but are grateful for the years we had with him: we had a lot of fun and went a lot of places together, so will treasure all of the memories and photos that we have. He loved being in his bag because it meant staying with us when he wouldn’t have been able to walk so far himself, and it was nice to see again on his final morning that when we put him into his bag panting and took him outside, he was calmed and comforted by it. He had a fantastic life and brought us a lot of joy.

As he always loved going out on the train (running up the stairs at stations was one of his favourite things to do when he was younger), and as he spent his last couple of years making his longer journeys in his jute bag and had his collection of photos of him hanging from different places on his travels, we couldn’t resist the opportunity to buy one of the reclaimed luggage racks from the retired Metropolitan Line trains. We got it from the London Transport Museum last week, and put it up in the porch this weekend. Timothy’s bag hangs from the hook, and his ashes sit on the luggage rack itself while we decide where to scatter them.

Someone sent us this cartoon (from Ubertool) which we really like, and think that it’s exactly what Timothy would think and, if he could, say. 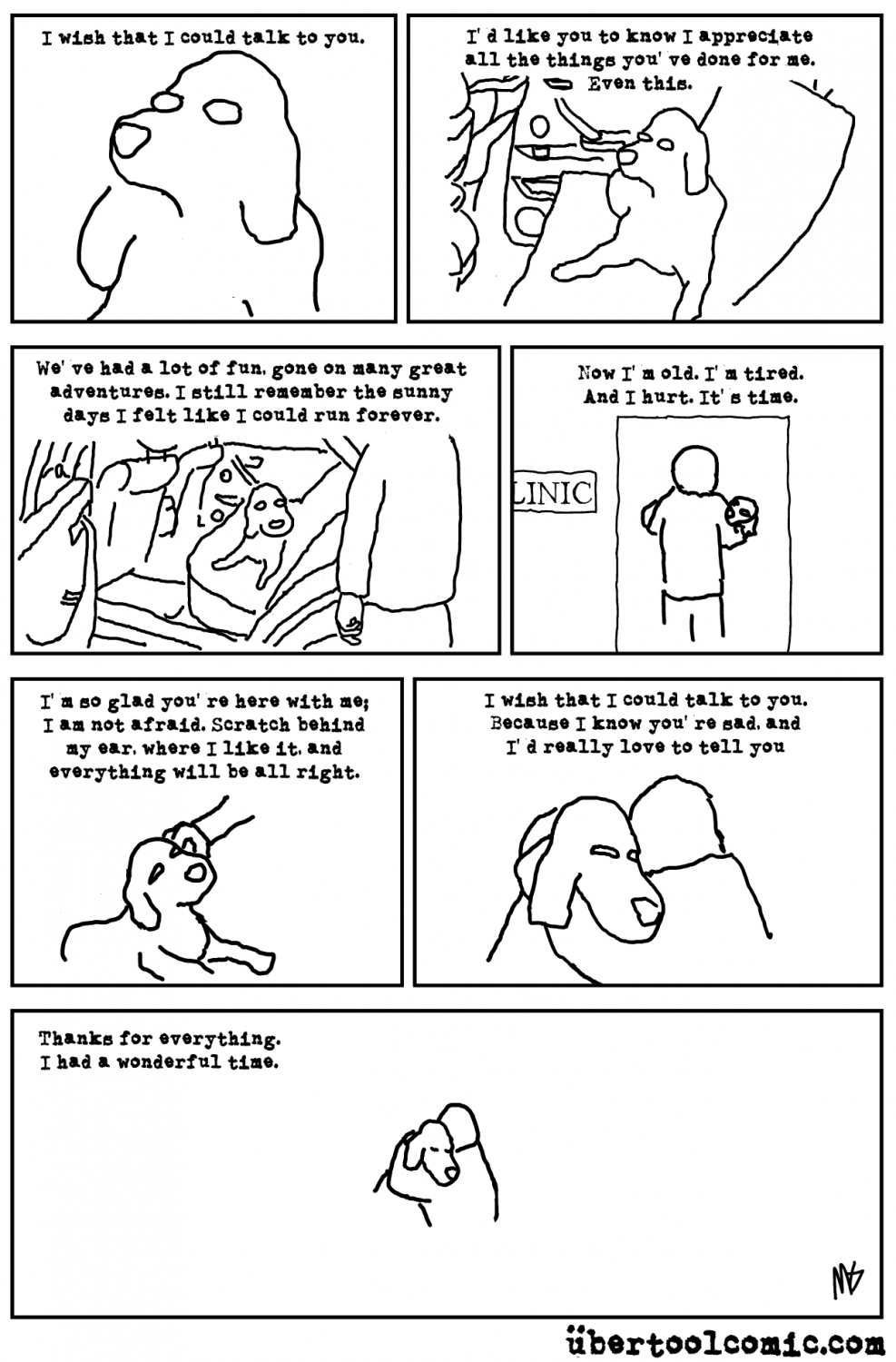